At one time of the year, a little “dead” in terms of new products, we can only think about what will come in the coming months. The new Samsung Galaxy S9 is undoubtedly one of the most anticipated devices and there are many rumors about the design and functionality that have been circulating in recent weeks.

Based on several “leaks”, several renders have also been made to give a more precise idea of the aesthetic lines of Samsung’s next top range. The indiscretions point to the two usual versions,”normal” and “plus”, which will not only have the diagonal of the screen as a difference.

Samsung Galaxy S9 and S9 Plus Features and Differences

The Samsung Galaxy S9 Plus model, in fact, in addition to a larger display, should have more RAM (6GB vs. 4GB) and a double rear camera, similar to that of the Galaxy Note 8. Compared to the Galaxy S8, the new Galaxy S9 should have a higher display-to-body ratio. In fact, while maintaining similar dimensions, the diagonal should further increase the reduction of the lower frame.

The Samsung Galaxy S9 must have a 5.8 inches QHD+ display and 3,100mAh battery as opposed to Galaxy S9 Plus with 6.2 inches and 3,600mAh battery. They would have an 8 megapixel front camera and a 12 megapixel back main sensor. The fingerprint recognition sensor remains in the back, but in a more comfortable position to reach it, just below the camera.

As for the processors, the new Exynos 9810 is expected to reach our market. In other markets, on the other hand, the Snapdragon 845 announced by Qualcomm over the past few days would be planned.

A new video on YouTube shows a 3D representation of the Samsung Galaxy S9 made by OnLeaks. The render confirms the remarkable resemblance to the current Galaxy S8 except in the back, where it is visible on the fingerprint sensor below the single camera (double in the plus version). 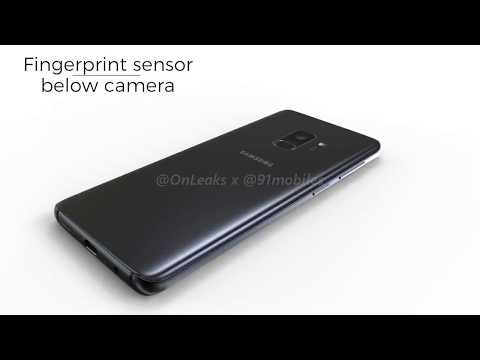 Dimensions must be 147.6 x 68.7 x 8.4 mm. Contrary to what has been said so far, the bottom frame should be only 0.1 mm wider than the S8. This aspect also seems to be confirmed by the claims of an expert in China, who states that Samsung has discarded an earlier prototype with very thin frames, capable of offering a surface to screen ratio of 90%, in favour of a design that offers a ratio (85%) much closer to that of S8 (83%).

Samsung could introduce the new Samsung Galaxy S9 and S9 Plus at the Mobile World Congress 2018, more precisely on February 27th. Indiscretion has surfaced in the last few hours from the South Korean reseller The Bell. This choice also seems to have arisen from the need to bring the handsets to market in April, in order to counteract the arrival of the iPhone X.

The above table, published by the retailer, shows the release dates of Samsung’s latest top of the range and also anticipates the Samsung Galaxy S9. The third column in the table represents the date of marketing of the devices and, as can be seen, there appears to be no rumours. Please note that Samsung Galaxy S9 and S9 Plus will be seen as incremental upgrades compared to the current S8, offering a very similar design and fully updated hardware specifications.

Samsung is expected to announce its new Samsung Galaxy S9 in the first quarter of next year, probably during an event in March.